Jorge Ramos, an encouraging voice for the Latino communities.

Jorge Ramos, an award-winning journalist, has emerged as the voice for Hispanic communities across the nation. On March 24th Fortune Magazine listed Jorge Ramos as part of “The Worlds 50 Greatest Leaders” and in Time Magazine, Ramos was listed as part of “The 25 most influential Hispanics in the United States”. As a voice for the Latino communities, Ramos has, on numerous occasions, spoken out against injustices and has defended pro-immigration policies to stop the deportation of immigrants such as: the Dream Act, DAPA, and DACA. Through Ramos’ career as a journalist and his involvement in organizations such as the We United Dream Congress, where Ramos is the keynote speaker today, Ramos has continuously stood in solidarity with the Latino communities. Below are just a few Tweets from Jorge Ramos not only informing but also encouraging Latinos.

The first two tweets are from Jorge Ramos’ 2013 Tweets supporting the “Dreamers” and their movement.

As we skip to Ramos 2016 Tweets, Ramos has actively spoken out against discrimination/racism. Ramos also supported and informed the public with regards to Latinos being a dominant voting bloc.  And how that might play a role in determining the 2016 Presidential election race.

The rise of Republican nominee, Donald Trump, Ramos has taken the task to hold Trump accountable for all of Trump’s disparaging remarks on minorities. 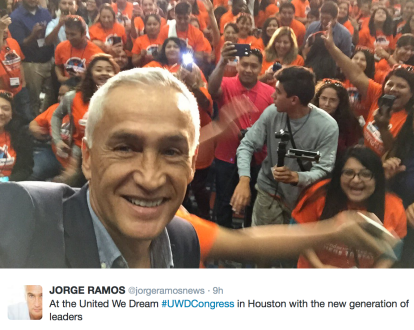 Lastly, I would like to end with an encouraging Tweet by Jorge Ramos who quotes Supreme Court Judge Sonia Sotomayor:

“Civic engagement is important to me, because that is how we get things done. This is how our voice is heard. This is how we change the world.”- Ximena Mondragon, 2015 Fellow

Find us on social media!